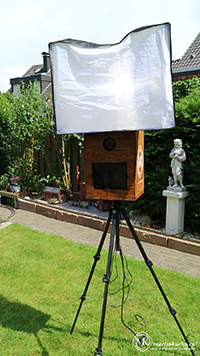 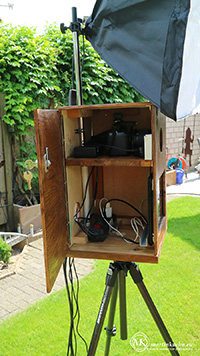 Here, I want to share some of my experiences when building my own photobooth which will be the star of every wedding. To build your own photobooth, several things should be considered in advance. First, the question arises which devices are necessary or which you would like to use. That means:

For a summary of my personal answers to these questions, see the list below.

In my case I decided to use a small Canon EOS1100D. The camera is running on battery which might be replaced during an event. This is possibly not the most comfortable option, but with two batteries (which you already may have) and the charger placed inside the box, the cheapest one. However, changing the battery more than twice during an event is rarely necessary.

I'm using a WiFi SD card which transfers the images from the camera to my tablet. Note that this may limit the size of the images since the send process of a larger image might take some time. Have a look at performance tests of the different cards before buying! I'm using a FlashAir W-04 which has a theoretical WiFi speed of 31.2 MBit/s which enables one send of a 4 MB image per second. Triggering sequences of larger images (4, 5, or 6 MB each) sometimes caused the older iPad 2 to hang up. Note that it is not you chosing the frequence of taking photos. Possibly, the tablet can be a limiting factor as well. Other tablets might do better, however, I have not tested any other until now. From my experience, larger sequences of images of 1-2 MB each worked quite well so far. If you have made some own experiences with the image transfer, please let me know! I decided to not use any printer since a large part of these fun photos will probably more or less directly go to the bin and those some photos which are great can also be printer afterwards.

To illuminate the scene, I decided to use a small LED panel (with connection to a power outlet) on which I can still mount a standalone camera flash (which runs on battery and which is connected to the camera via an E-TTL cable). Don't forget to have enough batteries for the flash available. Using the E-TTL cable, the camera itself can control the additional light emitted by the flash. LED panel and flash are both used inside a soft box.

The box itself was built from wood since it is a light and easy to work on material. I decided to assemble the box on a Manfrotto tripod without tripod head which I already possessed.. My main argument was to maintain transportability. By using the tripod, heavy stands or feet can be avoided. Additionally, the tripod is more flexible and thus better suited for different situations.

A small handheld remote control to trigger the camera is not the best choice for events where many drunken people use it in a more or less robust manner. So in my case, the small remote control got broke the actual first day the box was used. In order to answer this need for robustness, I ordered a more robust buzzer which then was connected to the circuit points of the remote control triggering unit.

To describe the construction process in some details: After having decided the measurements of the box, I cut out the single parts of wood (three normal sides and one side with slightly different measures to become a door and a bottom, an interior-center, and a cover part.) In the bottom part, I needed a small hole where the screw nut and the corresponding wrench had to fit in. A box-end wrench or a (ratcheting) socket wrench are best suited for locking the box. In the center part, I had to make a hole for the screw which locks the camera but I also cut out a larger hole so that a battery change was possible without loosening the camera screw. Of course, do not forget additional holes for the cables you are using.

The single sides were then strengthened at the ends by glueing some thicker wooden blocks on them; see the images. Guiding or locking elements for the tablet should also be considered. 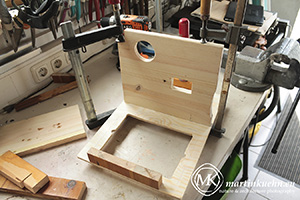 A thin metal plate was assembled below the bottom part so that the box can be mounted on a tripod and then locked by the 3/8" nut mentioned before. 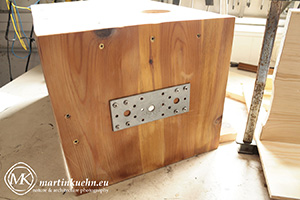 A hinge-joint is fixed to the back side so that one side can be opened as a door. 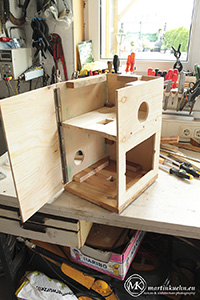 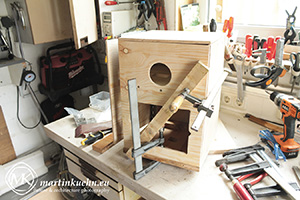 And of course, the box should obtain an individual touch. So I cut out my logo from a thin cardboard and used the remaining part to spray my logo on the box. 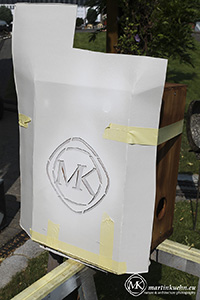 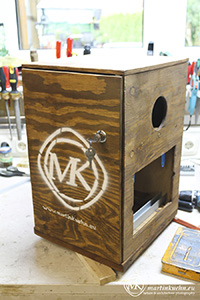 Thanks to the idea of my father, the LED panel obtained this nice dummy bulb fixing unit since the soft box itself contained a bulb holder. Other possibilities are of course possible. On top of the LED panel, a standalone flash can be mounted; see the image. 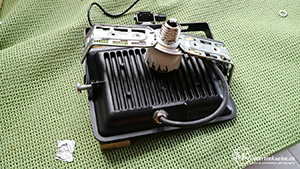 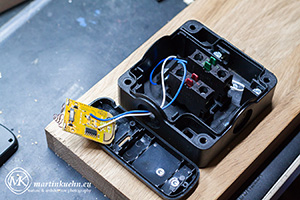 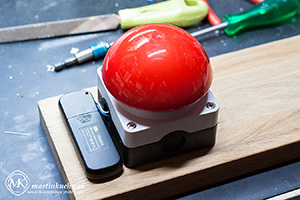